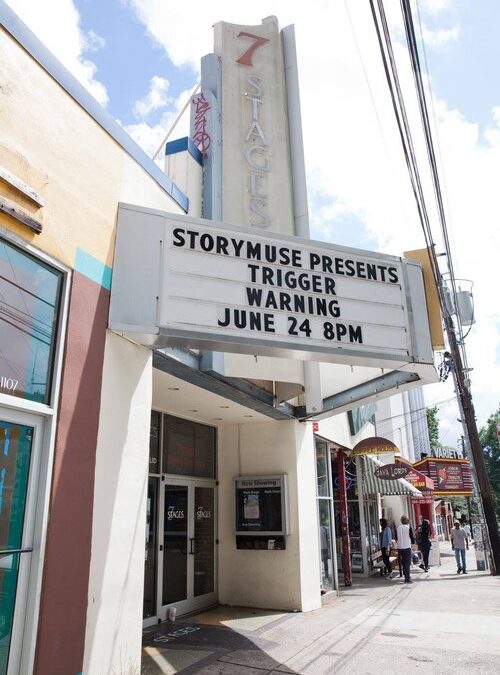 I had just emerged from one of those evocative performance experiences that leaves you buzzing. I stepped out from 7 Stages in Little 5 Points onto the sidewalk into a noxious mix of sour-sweet smells on a hot summer night.

Most folks were still hanging around in the lobby, celebrating the cast and discussing all the thought-provoking imagery, but with a stretch of long days behind and before me, I headed out and turned left to walk down the street toward my car alone.

Making my way through a small crowd waiting to get into the adjoining performance venue or taking a smoke break from a nearby restaurant, I walked on with the waining crowd noise behind me. Suddenly, I realized that, although I was the only person for a stretch of blocks, there was now more noise coming from behind me than made sense.

As I looked back, I saw him. A large man was lumbering straight down the middle of Euclid Avenue, yelling. And talking. And talking and yelling. Some of his sounds were not words so much as verbalizations. The effect was a cacophony like I’ve rarely heard emit from just one human body.

He began to weave from one side of the street to the other like a slow-moving pinball, bouncing from sidewalk to parked car. It was so late that there was no traffic for him to negotiate. Still, it felt likely a car or motorcycle could come by and introduce a new dynamic at any second.

I calculated his trajectory and surmised that there were a few scenarios in which we might possibly run into each other.

At this point, equidistant between where I was coming from and going to, but seeing others up ahead, I decided to walk swiftly toward my car.

Unfortunately, as soon as I picked up my pace, I understood that his pattern was not entirely random. He was walking toward things that caught his eye, and I had brought myself to his attention.

My walk became more of a walk-run as I approached the group of people in front of me. They were both walking more quickly but also looking back for me to join them.

I made it to my car, as did they, with not a lot of time to spare. I slammed my door shut as he slammed his flat hand down on the trunk of a parked car.

We all sat in the parking lot, frozen, staring at each other, like we were in a quickdraw standoff. Those of us in our cars watched as the man, full of so much anguish, just stood and yelled and yelled and yelled at everything and nothing, and then disappeared behind the building where we’d parked.

I could see through the darkness that my brief companions were on the phone. I’m certain they called the police. I could not.

You see, not long before this incident, police had killed Anthony Hill. He was a Black man, a veteran, who was experiencing a mental health emergency.

He was completely naked.

Murders of people of color by police are appalling, inexcusable, and yes, murder, but there’s often some story about some object in their hand or some provocation that’s given as the excuse. In this case, there was absolutely no way they could have mistaken a weapon in his hand.

Ever since, I’ve wondered during each encounter with a person having a mental health emergency–who can I call?

I have defaulted to not calling and hoped that person would find their way to safety and support because I didn’t want my ill-advised concern to lead to their death.

You may be hearing a lot of people talking about the need to “defund the police” right now. This is just one example of how redistribution of resources is crucial.

Mental illness is not criminal. Police officers are not trained social workers or therapists. Rarely do they know how to de-escalate a situation. The spiritual burden we have placed on them as public officers has fundamentally cracked them, which is why we’re witnessing the atrocious behavior we have over the last few weeks.

Imagine that a woman who’s just been raped would not have to suffer an immediate interrogation, treated as though she’s the one who has committed a crime.

Think what our schools could look like without armed security guards, but rather with full and effective arts programming.

Hold in your heart all that would do for our kids’ success, self-esteem, empathy, and, yes!, learning outcomes in science, math, history, and beyond.

And then, when you’ve imagined all the places where proactive, holistic approaches to our community could replace the paltry, harmful, bandaid approach of policing, if you still think there’s no way that crime will go away completely, imagine a small community police department staffed by people who actually live in that community.

It’s a beautiful dream. A dream based on living and thriving, not hiding and dying.

Here are some more perspectives and resources I’ve found since originally publishing this piece: