these boots were NOT made for walking 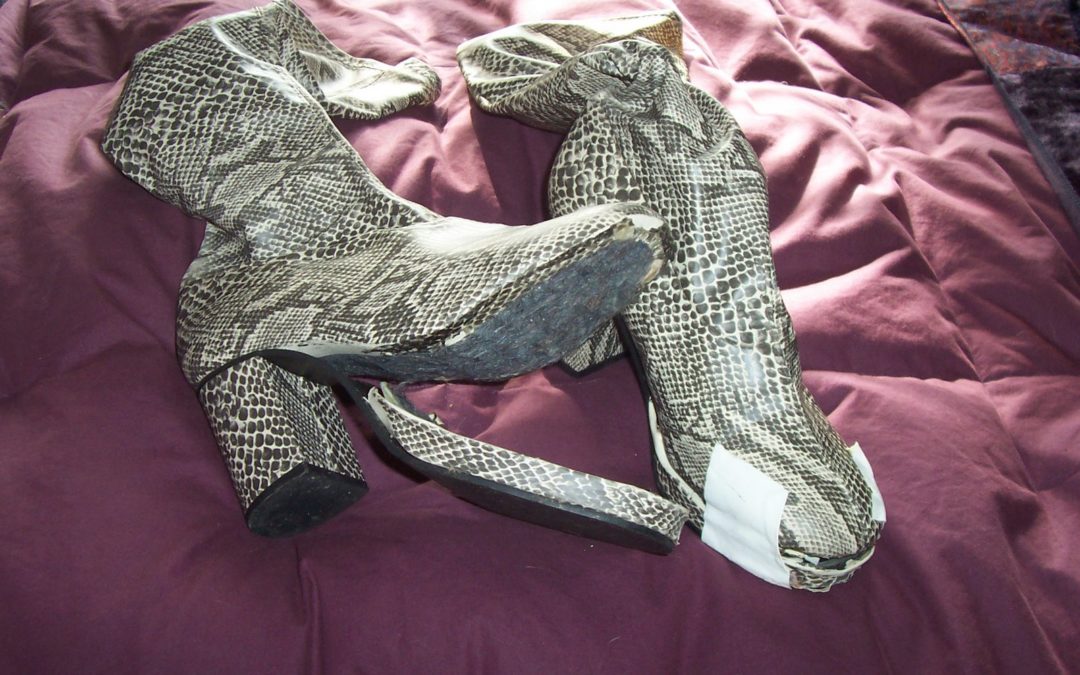 So, I made it all the way to a fourth date with this guy. His name is Morgan, and he’s a bridge construction engineer by the way. He’s nice enough, but I’m not entirely sure whether we’ll be having a fifth date. Seems he was destined to witness one of my more humbling evenings. Of course, I’ve had a few.

This one was legendary.

The plan: Morgan had tickets for us to see Avenue Q at the big, fancy theater in town. We met up with another couple beforehand for a lovely meal and then went to see the show.

You know, it always ramps it up a notch when meeting other people is involved, and then when you throw in a nice theatre evening as well? I was a shade nervous.

I had been planning my costuming for days.

So, about an hour before I was to arrive at said date, I’m getting ready, and all of the sudden, I start feeling a little queezy in the down-low. Nothing outrageous, you know. Just not right. I took some Tums and kept trecking. There was no reason not to as far as I could tell. It was just a little occasional wave here and there of “oh gee, that’s not right.” When I didn’t feel that, I felt completely fine. Great actually. I hadn’t really eaten lunch, just snacked on trail mix and cereal, so maybe I’m just hungry I thought.

Fast forward to sitting in the restaurant, and we’re having a lovely time. Everyone’s really excited about the play and the food that’s coming soon. I, on the other hand, am having those little moments of “uh oh” with increasing frequency. I excuse myself at a point in the conversation that is a bit awkward and go downstairs and stand over the toilet and pray. I pray that, if indeed I’m going to vomit, it will happen quickly so that I can make it back to the table within the normal parameters for being absent from a table full of diners. I want very much to play it off like I’ve been fluffing my hair.

I go on back to the table and hope that perhaps eating some food will make the badness go away, but a few minutes later it hits me again. Now, we all know that there’s no way that you can excuse yourself twice within 10 minutes like that without arousing suspicion, so this time, I just say, “I’m so sorry, I’m not feeling well and I’m going to have to go to the bathroom again…”

This time before I could even get to the door outside of the bathroom, my legs buckled beneath me. There I was, on all fours, doing the Technicolor Yawn. I swear I threw up things my grandmother ate.

But, the good news is, a doctor showed up on the scene right then. He started asking me all sorts of questions, and I knew I’d be alright when I heard him say, “Go find the people she’s here with…” and hear myself respond….

I got up out of the floor and went on into the bathroom, cleaned myself off, and was met by the woman from the other couple as I was coming out the door. I told her briefly what had happened, and we made a pact not to tell the guys about my little adventure. When we got back to the table we talked about world domination and the keyboards and screens that come out of the walls and stalls in ladies restrooms.

So, did I mention that it was raining cats and dogs that night?

Well, it was, and my carefully planned outfit comes to bear here. Said outfit involved these cool/funky fakeskin boots that I’d been dragging around from state to state for a couple of years now but had never worn. This seemed like the perfect occasion to, um, break them out. Well, break them in is what I should have done.

We got about 15 feet out the door of the restaurant in this heavy rain and all of the sudden, the sole of my boot separates from the top. Not just a little bit, but all the way back to the middle of my foot. These boots were stacked, and given that they were fakeskin, they rather looked like a giant alligator mouth had opened up under my foot. I had two choices in locomotion to keep from tripping. Either walk backward a la Michael Jackson Moonwalk, or walk forward and pick my foot way up off the ground in a sort of weird half high step or march.

Fortunately, the other guests in our party thought it was quite adorable, and they played along with me as we made our way from the car to the theatre. We pretended that we were in a bizarre parade and everyone walked with the half, high step. Even folks who weren’t with us joined in.

When we got to the theatre, I played the “I’m in the theatre too” card, and got my way into an office to borrow some tape. Now, my fun and funky outfit has been reduced to ghetto-style white tape on my boots and my skirt is still very damp from where I’ve washed all the vomit off of it.

The play was fantastic. I really enjoyed that part.

But, when we left, and were trudging back through the rain toward the car, if you can believe it, my other boot did the exact same thing. I couldn’t tell them. I had not a shred of dignity left at that point. So, I just shuffled along and pretended that it was because of the rain and the first boot that I was going so slow.

So, like I said, I’m not too sure I’ll be making it to a fifth date with ol’ Morgan. He’d have to be an awful brave soul.

Nevertheless, like so many other things in my life, as much as the night had its difficulties while in progress, I sure do enjoy telling the story now.