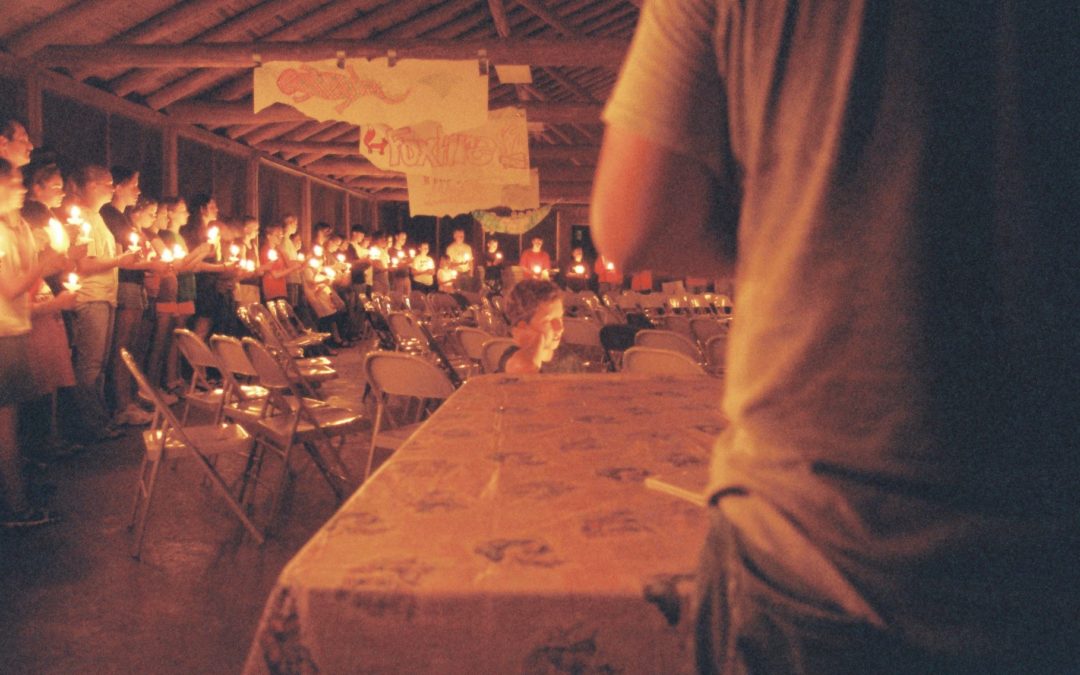 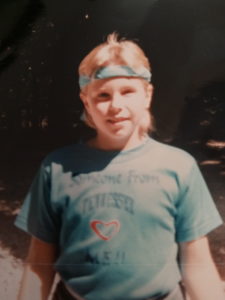 She moved around a lot as a kid. The one constant was summer camp. No matter the small town she packed up her suitcase, pillow, and sleeping bag at the beginning of the journey, camp was always the same when she got out of the car.

Each year started with an epic Four Square competition in the dining hall as campers waited restlessly for everyone else to arrive. In retrospect, it was maybe a not-so-friendly way to get to know one’s peers. Hostilities and rivalries that could last throughout the week might begin across that concrete pad.

Each Thursday night was the Talent Show, something she excelled at, started to plan for long before school was dismissed in May.

She studied camp culture and came to know its ways. The complete container, the microcosm, the utter knowability was appealing compared to the outside world where she always felt like an alien and the rules were incomprehensible. At camp, there were songs that everyone knew by heart and sang daily–sometimes three times a day–with gusto. There were inside jokes; everyone was on the inside.

And stories! This was a place where stories had a currency like none other, except perhaps clandestinely traded cans of Mt. Dew. Because she was really good at telling stories, she was like a wealthy banker in her little village.

Although they weren’t Boy Scouts, be prepared was still a subliminal creed. She watched as camp counselors outraced each other to have the most well-outfitted fanny packs and first aid kits, to whip out the best Swiss Army knife, that extra poncho. This love language–in the form of equipment, readiness, scrappy helpfulness–she responded to it deep in her DNA.

Camp became a second home. First she volunteered for weeks at a time in high school, then spent entire college summers, eventually moving in and becoming full-time staff after graduation.

Yet camp is a lifestyle for the young. She was growing less young every year. Endless annual crushes distilled down to one. Eventually she had to admit to herself she was just waiting for her co-worker to come around to the life plan that they would get married, and run the camp together–the ultimate promotion, the ultimate camp co-counselors.

To her great sadness, he was not on board for this life plan. 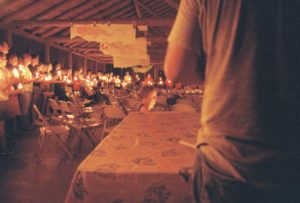 Devastated, she packed up her things and left camp finally and completely. Although, for years to come, every year at the beginning of June, when the fireflies emerged, she felt a distant pull, a deep yearning nostalgia for creek hikes and campfire, bleached concrete shower stalls and mildewed towels, laughter at dusk and mosquito bites. A whiff, an image, a sense–it all tugged at her corners and poked at her soft places.

She started fresh in a new town, working with young people in community, not unlike camp in many ways, just without the bugs.

She traded in her backpack and walkie-talkie for a cellphone and a meticulously curated event planning box, outfitted like a fisherman’s tackle box. Her car became her tent. Out on a walk? caught in a storm? suddenly inexplicably cold? She doubled down on self-reliance and helpfulness, the way any good camp counselor would.

Once, on the way to the theatre, a friend, looking in the rearview mirror, reached up to her earlobes nonchalantly and complained about forgetting to put on earrings. She started carrying a small box of emergency jewelry.

Being helpful and prepared was like a silent mantra. She yearned for the day when someone would need…something…and she would pull the (exact) (right) object triumphantly from her car’s trunk as if it were Mary Poppins’ purse. Yes, let us enjoy our spontaneous picnic with the blanket I have right here!

Somehow, in her mind, one of these moments was destined to attract her soul mate, her lifelong co-counselor. She waited and watched, worked and hoped, fancying herself like Mary Bailey, practicing all her genius to make a beautiful, unexpected moment out of ordinary objects and less-than-ideal circumstances.

Over time, a permanent co-counselor never showed up. She started to realize that she’d dedicated her life to stories, community, and being prepared, but the self-reliance part? Maybe she was getting a little too good at. It was becoming harder and harder to ask for help, and maybe that’s what she needed to learn how to do.

If a person doesn’t need any-thing, does she really need anyone?

One day she looked up and realized she hadn’t been camping in decades, turning down many camping trips because she no longer had the equipment.

No, came the answer, quiet and true. It was time to go about things differently.

She picked up the phone and called her friends. “Yes, I’d love to join you this weekend. Can we talk about what that would mean?” They were overjoyed at the chance to support her.

She didn’t want a tent, though. She was very clear about that. She wanted to sleep in a hammock under the stars.

That night, at the campsite, she stood next to a campfire and told her friends the stories she used to tell to children. They smiled and laughed and nodded, agreeing it was, yes, yes, very good that she’d become a storyteller. 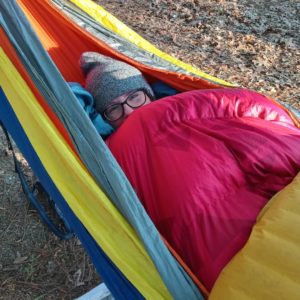 After all the s’mores were eaten, all the secrets shared, her friends wandered off to their tents, and she climbed into her hammock to lay and listen to the sounds of night in the forest in the way that felt both natural and foreign, the old genes being expressed.

She sighed, stretched, settled into her middle-aged self more comfortably, and let go of some old stories.

“I am prepared,” she whispered to the night sky. “Prepared for whatever comes next.”