Can’t Go Over It 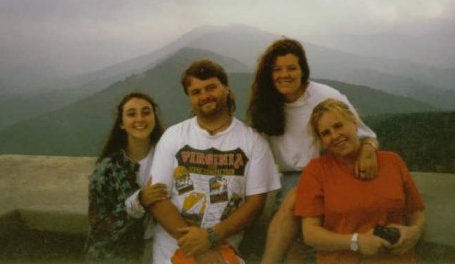 After spending the week hiking all over Buffalo Mountain with little kids, often the staff would voluntarily spend even more time together on weekends, hiking other mountains. This is Mt. Mitchell in North Carolina I think.

If you’re unfamiliar, this is one of my best loved stories, which was featured on NPR.

When I was a camp counselor and administrator in the 90s, I went by the nickname Crickette. It suited me well and helped me separate what felt like the dream world of camp from “the real world.”

Having a nickname also helped me imagine I was different from who I thought I really was. I thought of Crickette as more creative, powerful, spiritual, and someone who cared less about her body, or rather how her body looked. This persona served me well. One thing that Crickette definitely did well was tell stories. (I’m so glad that life circled back around, and I was able to re-integrate that and other aspects of Crickette’s personality into my life in the last decade.)

I still remember hoards of campers running up to me at any given time, whether it was a Monday as they were just checking in and remembered me from previous years, or as I approached their group on a hike or at a cookout…”Crickette! Crickette! Tell us a story!”

There were a few stories I was most famous for, including “Herman the Salamander” and “The Peach.” However, if we were really having a good ol’ storytelling session, or especially if little kids were involved, then we would often come down to the classic call and response story, “Goin’ On a Bear Hunt.” You may know it as well, as this one is not at all unique to me or my camp. It goes something like this…

The reason why this story is so fun is because it is truly interactive. Participants get to slap their knees, clap, make swishing sounds, pretend to climb trees, swim, run–it calls on the imagination and the collective experience of the audience. When the expedition reaches a tree, a field, a swamp, a river, a caaaaaavvvvve, there’s also this fabulous part that always happens…

What an interesting thing that is. How often in our journeys we reach an obstacle and think, how am I going to get around this thing that I perceive to be blocking my journey? Surprise! The obstacle is your journey. It’s part of the assignment.

There have been times in my life that I regard as moments of profound change. Sometimes that change is not something I would consider to be, on the outside, an adventure. Certainly not a fun, pretend photo expedition with campers. It’s so tempting to consider just laying down in the face of some things. I’ve spoken about that stuck feeling elsewhere.

Nevertheless, I just love this idea from The Bear Hunt and have started to incorporate it into the fabric of my brain space as a mantra: Can’t go over it. Can’t go under it. Can’t go around it. Gotta go through it. The point is not to figure out how to avoid the discomfort, the lost feeling, the not knowing what comes next.

The point is to just keep moving through.