History is Not a Fact pt. 2 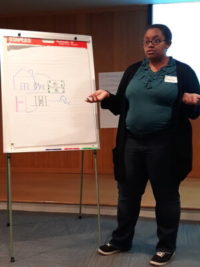 Where last we lay our scene, we were discussing how, history, as its taught to us and spoken about, is often not the full picture.

So many things have echoes from
…the personal
…..to the organizational
……to the community
…….to the national and global.

Our tendency as a society to only focus on, retell, and understand one part of our history, is also true of our personal stories.

My family moved around a lot when I was growing up. We lived in parsonages, which are homes that are owned by the church. When I was a very young girl, we moved to a new parsonage. I had many, many nightmares in this house. I dreamt of planes crashing into the house, of myself being pulled down the hallway and being sucked down into the basement by a demon, of firey creatures trying to tickle-torture me to death. Though nightmares are a frequent thing for small children as their brains grow and develop, I don’t recall having them anywhere else like I did in this house.

Later on in life, I learned that the minister who’d lived in the parsonage just prior to us had killed himself there on a Sunday morning.

Another moment…I remember sitting around a dinner table in my teen years with a couple from our church. As conversation became winding, the stories started to flow. The couple told us about how, though they had two grown children now, they’d come close to having a third. The pregnancy had come nearly to fruition, but then, in her final month, the mother discovered the baby had stopped moving. A doctor’s visit revealed that, in fact, it had died inside her. It was decided it would be best for her to carry for weeks until her body went through the natural process of labor.

I remember asking her what it was like to walk around for all that time like that. Did she go to her kids softball games? Did she tell people? Did she try to conceal her agony?

When, as an adult, I came to understand the national debate about women’s autonomy over their bodies and reproductive health, I started to reconsider that evening. Was I ignoring knowing glances between the adults in the room? Was there another story going on? I think, perhaps unspoken, the doctor was unwilling to induce her labor because no one wanted to be accused of having aborted the child.

The dawning realization that there were two narratives–my perception of reality and someone else’s–happening simultaneously gave me great pause. There are many more moments in my life like this, where I’ve come to understand that my version was not the same as others.

With the life maps exercises I facilitate in both public workshops and private coaching, I’m always struck by the opportunity, the intimacy, the very real privilege (in the best sense of the word) to have people’s lived experiences become visible, palpable. We see what is typically unseen by average humans encountering each other in the world.

Our multiple realities collide into one space.

I think about the moment when, at a residency in Charlottesville, VA, a Black woman got up and told her story about striving for excellence in her educational opportunities but constantly being held back. After her story was over, her white colleague spoke up and said, “If I hadn’t heard that story come out of you, like if I’d just heard it on the news, I would have thought it political or controversial.”

The personal is political.

Unfortunately, I fear that social media and other technological forces are creating a greater fracturing of our reality at such a pace, causing breaches that we may never be able to repair.

Many people talk about the search for closure in their stories, especially when something was hard, but I really don’t think that’s possible. I believe we are, or should be, constantly re-evaluating our relationship to our stories.

When we are dedicated to growth, curiosity, and change, we have the opportunity to constantly reevaluate our stories and what they mean. In that way, it’s not just that the reality we lived through at the time is different from other people’s, but our own version shifts, morphs, and finds new iterations. (See the TED Talk I’ve dropped in below as something that’s very much informed my thinking in this matter.)

So, just like I said in the previous post, when it comes to the version of history that we talk about in school, the same is true of us as people…We have to evolve.