Everything We Need pt. 3 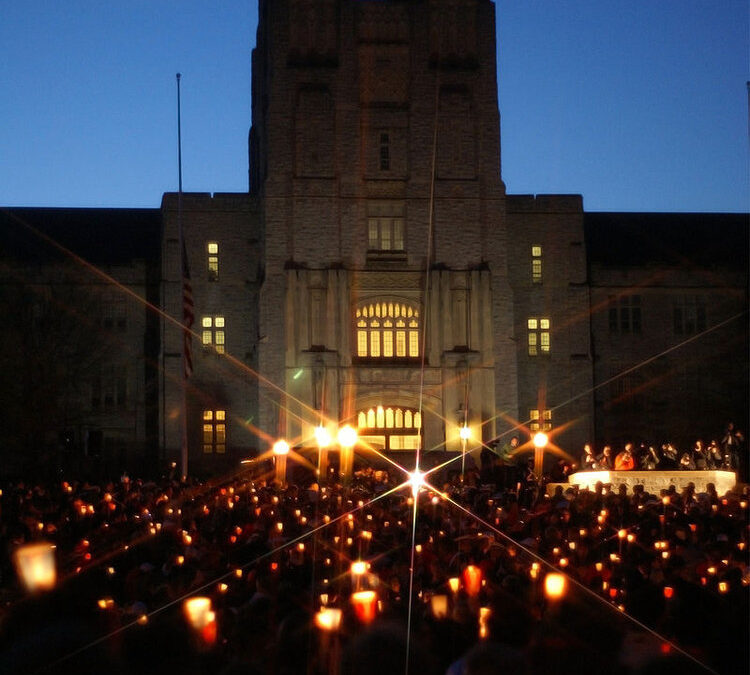 It’s been unseasonably cool this week here in Atlanta.

We’ve been waking to brilliant, bright, blustery days in the low 40s. Days like this remind me of my years in Virginia.

On the morning of April 16, 2007 as I started my day in Blacksburg, the wind whipped, violently ripping dogwood petals from trees. It started to flurry a bit, mixing petals and snow together into a beautiful confetti strewn across the grassy mall.

I was having breakfast at Gillie’s with my friend, Megan, to celebrate the completion of my final project (the MFA equivalent of a thesis). We were supposed to go hiking, but the snow had changed our mind.

First, Megan’s dad called from Pennsylvania. Pennsylvania? Yep, Pennsylvania. Even though he was three hundreds miles away, he had learned what was happening to us on CNN before we did.

Then, someone came inside, spoke to a server in an alarmed state. The server stood on a chair and boomed with a loud, officious, megaphone-style voice that there was another shooter on the loose, said that we’d all been advised to stay inside and away from windows. Our friend, Anne, had been locked down for hours in this very same restaurant during the previous incident. We fairly quickly decided we did not want to suffer the same fate, threw money down on the table, and hightailed it for my car.

We sat for the rest of the day, watching it all unfold on TV in Megan’s tiny attic apartment just a few blocks off Main Street. As ambulances screeched up and down the road for hours and hours –

The days that followed April 16 are a blur of images, a collage of poignant memories as we decided what to do next, to build out of that moment. There were moments of togetherness and moments of total isolation. There was incredible art-making, there was toxic proselytizing.

About two weeks later, finally starting to return to some semblance of normalcy, we had our first production from the theatre department. Megan, not ironically, had created an original traveling show about safety & diversity in the community. It took place at churches, in building foyers, and other non-traditional spaces all over town.

That night, I ran into an old friend I hadn’t seen in ages, certainly not since our great departure from reality. She looked at me and said…
“It’s good to see you.”

We both just stood there, looking into each other’s eyes contemplatively, whimsically, half-smiling. I can’t remember which of us said it, but after a moment of us both clearly thinking the same thing, one of us said, “Remember when it’s good to see you, didn’t mean I’m glad you’re alive?”

This is another one of those moments I’ve been ruminating on since our current great departure from reality. There are a lot of messages encoded in the DNA of what we say.

I used to feel twitchy when my mom would tell me to be safe as I departed on a journey.

These days, I hear people say stay safe to each other as a parting wish all the time. It feels even more poignant and loaded than ever.

They also say wash your hands as a sign off to emails and phone calls.

When we say stay safe, are we really saying, I love you? When we say wash your hands, are we saying, please do this ritual for me so we will see each other again?

I feel like there are other messages that are just under the surface, or maybe buried deep, when we say these things to each other. I don’t know what they are, but they feel innate, primal.

What was easier about the Virginia Tech massacre was that we were able to gather together whenever and however we needed to talk, to hug, to mourn, to cry, to look each other in the eye. In some ways, I do feel like we’ve already lived through everything we’ve needed to understand how to get through this moment, but it’s also achingly different.

One of my most indelible memories from April 16, for me at least, is that we shut down the phone grid for hours. It was very hard to get a call in or out as the world reached out to us, and we reached back. To this day, if I can’t get a phone call to go through for very long, it starts to make me sweat. Now, thanks to the pandemic, I hear that daily phone calls are way up. It gives me joy and comfort that we are finding modes to stay connected, even from a safe, social distance.

Just know that, whether it’s through a reply, a Facebook post, a LinkedIn DM, or a phone call, it’s good to see you. Stay safe.