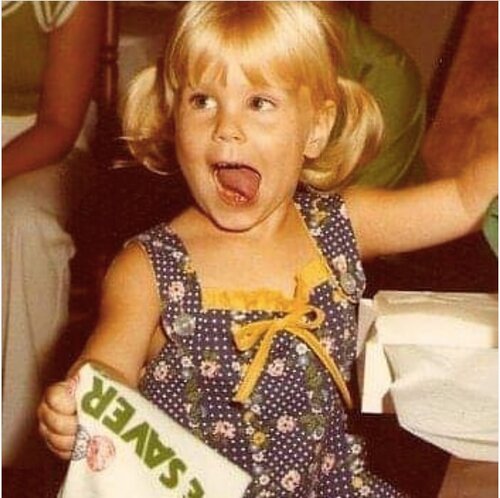 When I was maybe about eleven or so, I used to come home after school, a latchkey kid, and skulk around the house trying to be quiet as my mom slept a few more hours before dinner and then going to her job as a nurse.

One of my favorite things during that time was to play, “COMMERCIAL!” I would bop around the kitchen, making my afternoon snacks, pretending to be in a commercial about Five Alive Juice, SnackWells, Lean Cuisine, Raisin Bran, whatever available comfort food of the moment.

As I pulled said snack out of the fridge/cupboard to prepared, I would turn to the middle of the room, addressing an imaginary camera, and enthusiastically discuss what I loved about this thing, how delicious and nutritious it was.

Not long after, we got a VHS camera, and I began to play around with it a bit, making some videos for class projects and Olympics of the Mind competitions.

Then, self-consciousness made itself an unhappy camper in my spirit. As I reached the end of my latency period, very like Adam and Eve were ashamed after they became aware of their own nakedness, I suddenly became aware of myself in a wholly other-ing sort of way way.

I grew increasingly uncomfortable with my own image being reflected back at me.

I remember my dad chasing me around our house, at family events, with the imposing, blocky contraption perched on his shoulder, saying, “Stay still! Say something for the camera! I don’t understand what happened! You used to be such a ham when the camera came out when you were a little kid!”

I frankly couldn’t explain to myself of anyone else how the camera became my enemy, although, I’m sure it didn’t help that I was headlong into a protracted period of being bullied throughout middle school.

The problem has gotten no better in this new world in which we now find ourselves where images and videos both are immediately available via cellphones and social media. I may no longer be living under the constant threat of bullying, but the internet can make you feel like the trolls are not very far from your virtual doorstep.

Over the last year, I have become increasingly aware that I need to make more video content for my website and other parts of my practice, but it’s been a real sticky wicket for me. The self-consciousness has taken on a different quality as I’m not handling the rapid onset of middle age gracefully.

Finally, though, I had a cause compelling enough to make me get over myself and turn on the camera. A few weeks ago, as we launched the fundraising platform for my latest storytelling project Shelter & Place, I knew I very much needed to have a video making the ask. After whining about it to about three or four people, one day, I rose up out of my chair, put on some lipstick and earrings, and made the goshdarn thing.

You know what? Just like so many other things (going to the gym, cleaning the laundry room), it didn’t feel great in the moment, but it did feel great to not have it hanging over my head anymore. Now, I can see the results.

Also, like so many of those other things, after I’d done it once, it got a little bit easier to do it again…

I’m not sure if I’m ever gonna love looking in the mirror, but I can certainly continue to work on loving myself. And if there’s one thing I’m quite certain about, it’s that I’m always willing to act a fool when it’s on behalf of a cause I believe in.

What are you willing to set yourself and your own selfish ego aside for in order to be part of a greater story?