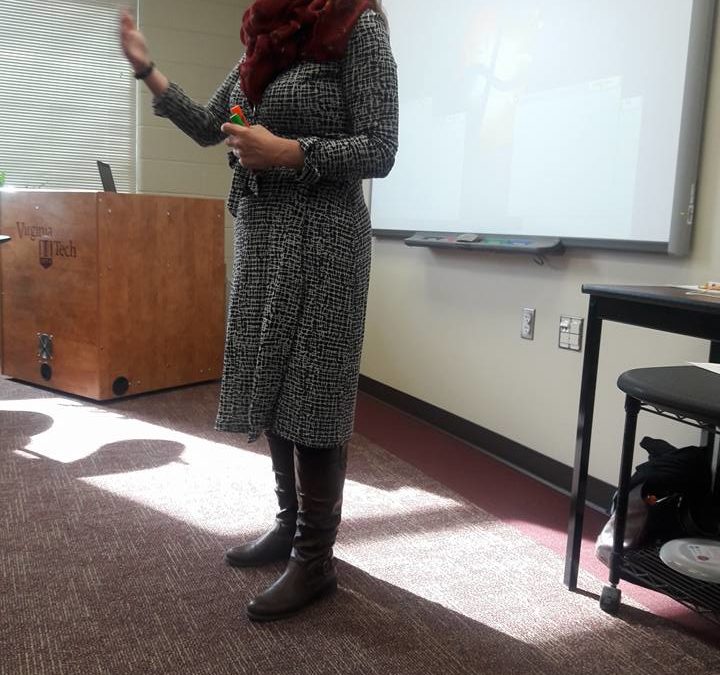 Sometime in the month of December I got an email from a colleague with the subject line:

I knew that. I knew my friend already knew that. I was curious what this was about, especially as it’s not standard to put a subject line in quotes.

As you may remember, I am in the middle of a year-long residency at Virginia Tech, where I’m returning several times over the course of the year to facilitate storytelling work, building toward the ten-year anniversary of the shooting tragedy in 2007.

During my November 2016 trip, Dr. Kimberly Carlson had recruited me to teach a storytelling workshop for the Pamplin Leadership Academy, a program for business and accounting students to gather monthly for day-long sessions to explore topics for their future professional endeavors.

As my session was the first in the afternoon, Kim invited me to arrive early and enjoy lunch with the group – get to know them a bit in a more casual atmosphere before we settled in to work. One of the first students I noticed was Warren. He was a young man with a distinctive look, who stood off to the side, humming and singing to himself. Despite several attempts to draw him into conversation, Warren kept pretty internal.

After lunch, as I began my program, I encouraged everyone to stand and do a few exercises to help with digestion before we launched all the way in. “If you make a fist with your hand and gently rub it along your belly in a counterclockwise fashion, along the same route as your digestive track, it will encourage digestion.

“Where’s your data on that?” Warren jumped in.

“Excuse me?” I asked aghast.

“How do you know that’s true?” He returned with force.

I wanted to say, “Because Celeste Miller told me so,” but somehow I knew that wasn’t going to work in this situation.

This began one of the longest afternoons of my life. At every turn, whether I talked about the increasing empathy through hearing our stories, strength through vulnerability, anything at all, Warren would chime in with…“Where’s your data?!”…”I want to see an article to back that up.” I’d never known a person in a storytelling workshop to be so recalcitrant.

By the time I was done, I felt like I was limping out of the class; I was completely undone. The feeling wasn’t much different from when, at the end of the day as a substitute teacher, as the kids had all decided to take out their teenage angst on me, I would sit in my car for ten minutes before I could start it.

Whilst I was packing up and “limping out” though, I overheard Kim patiently, yet fervently speaking with Warren. He was still arguing with her about the value of this material.

“But you’re a researcher,” she implored. “Don’t you think data tells a story too?” As I listened to her careful, calm explanation to him, I gained even more respect for Kim, who is a person I’d always had a great deal of admiration for anyway. Teaching is not easy, folks.

So, imagine my surprise when an email from her popped up in my inbox a month later. She said that she simply had to write me right away as she’s just had her end-of-the-semester check-in with Warren:

I just met with him and asked what his biggest take away from the semester is and he said “Storytelling is important.” He said that day he was just frustrated because he’s not good at it, particularly the emotional appeal part of telling stories. After his meeting with me, he was heading in to an interview, so I helped him think of 2-3 stories he could tell while in that interview.Moral of the story… never underestimate your impact!

Would that we always had such validation, even on down the line. I guess that’s why we all have to look for it from within.