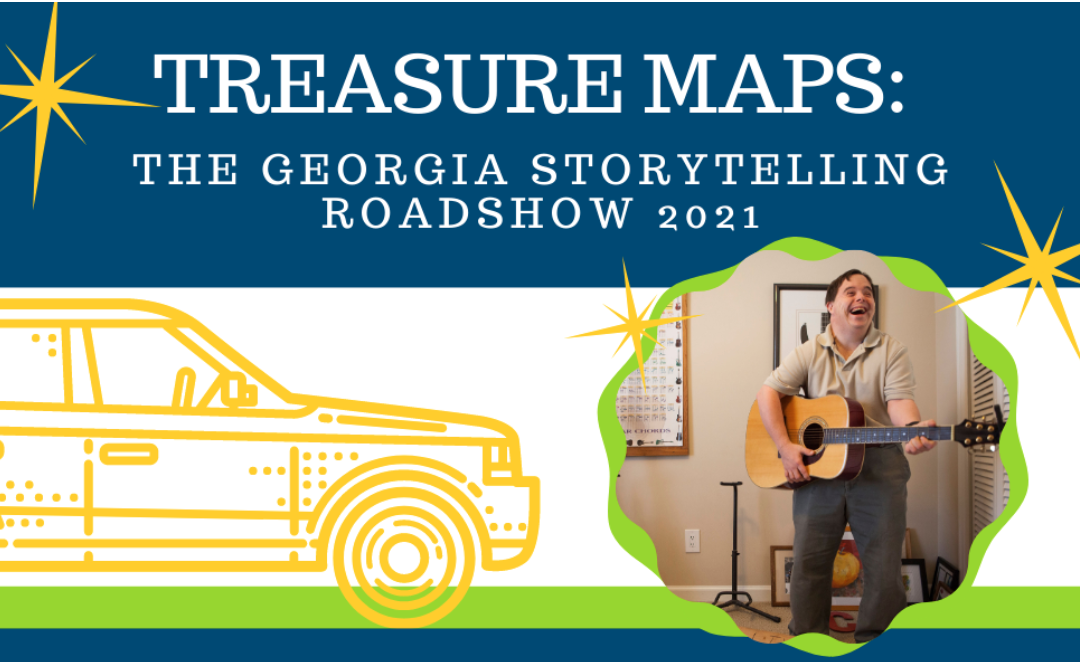 Treasure Maps is a pop-up, interactive, drive-in theatre! The Treasure Maps drive-in show will include live-local hosts, installations, and safe interactive activities. The roadshow feature is the film screening of Treasure Maps on the big screen. Treasure Maps showcases a collection of 10 Georgia Storytellers’ Life Maps which provide an up-close and personal viewpoint into what it’s like navigating the complex webs of life in our communities as a person with a developmental disability.

The show will tour six cities across the state of Georgia—Atlanta, Dahlonega, Augusta, Savannah, Macon, and Albany—in late June and early July.

Treasure Maps will be a safe, outdoor activity. The audience will enjoy the show from their own vehicles and masks are required if you exit your vehicle. If you have any questions or concerns about the safety of a show in light of the ongoing coronavirus pandemic, please contact us at ddstorytellingga@gmail.com.

“The primary objective of this project,” said Shannon M. Turner, Founder & Creative Director of StoryMuse, “is to provide a virtual stage for the important stories of people with developmental disabilities, inviting their stories in from the margins to the center of our communities. But an equally important component is to provide education and advocacy to the general population and legislators around the Medicaid waiver, a vital funding structure which supports the lives of people with developmental disabilities so they can live independently.”

ARE YOU THE NEXT ROADSHOW STAR?

We are looking for 10 people with developmental disabilities to be Storytellers in the Treasure Maps roadshow.  Join us for an information session and apply on February 25th at 5pm. Learn about the roadshow, storytelling, and how you can be a part of the fun!

Join us for the informational workshop and apply to be a storyteller in Treasure Maps here! 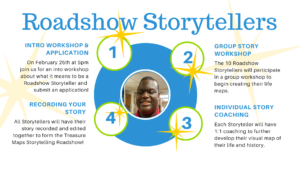 Treasure Maps: The Georgia Storytelling Road Show 2021 is a series of drive-in performances held in six target cities across Georgia and showcasing the story performances of 10 people from across the state with developmental disabilities. Being responsive to the social activities and safety of the general public, this project aims to engage with people in an interactive and in-person way while upholding standard social distancing practices.

The goal of the project is to create a platform that increases the awareness of the general public and legislators of the stories of people with disabilities and to increase participation in GCDD’s grassroots advocacy efforts for better budget and policy decisions on the state level.

This goal will be accomplished through the following major activities: The Treasure Maps team will lead 10 storytellers with disabilities through a series of storytelling workshops culminating in their ‘treasure map stories’. Each participant will have their treasure map story recorded on video, and the stories will be edited together to form the main exhibit of each show.

The six shows will be held in strategic cities across Georgia and will feature interactive components for the audience with the storytellers through audio and live interactions. The shows will be produced in collaboration with local community members to accomplish location, promotional, and logistic activities. Each show will be co-hosted by a storyteller ‘the Show Marshal’, a local community member, and a Treasure Maps team member. The show will run approximately an hour and a half and will include a direct advocacy action at the conclusion.

At the heart of this work are the “Life Maps,” where participants are led through a process of creating a visual map of their lives and histories. Inspired by these maps, the project foregrounds the experiences and lives of people with developmental disabilities as buried treasures that will be unearthed and celebrated through expressive performance.

Storytellers: The Storytellers in the show will be 10 individuals with developmental disabilities who represent the different regions and diversity of the state of Georgia. At the project beginning, there will be a virtual introduction workshop held where interested individuals will attend to learn about the show, participation, and the process. From this initial workshop, potential participants will be invited to apply to be a storyteller with the show. Once the 10 storytellers are selected, they will go through a series of workshops and individual story coaching sessions to create their story treasure maps which will be in the main event of each show. A stipend will be made available to each storyteller for supportive use in participation.

Local Committees: Involvement of local community members is integral to the success of the show. At project start, the Storytelling Team will conduct outreach activities to the six communities and identify/recruit individuals who will make up the local community members committee. These individuals will serve the purpose of locally legitimizing each show as well as providing knowledge of best local venues, potential partner organizations, and using their local networks for show promotion. They will also be responsible for securing match services including a photographer and headsets for the show. Additionally, one local community member will be a co-host at the show.

Treasure Maps: The Georgia Storytelling Roadshow will be a series of drive-in performances held in 6 target cities across Georgia and will showcase the stories of 10 people from across the state with intellectual/developmental disabilities. Each performance will include video performances from the ten storytellers and will have interactive components with the audience. Each show location will be co-hosted by a Show Marshal (a storyteller in the show from the local community) and a Local Cohost (a local community leader with broad appeal/charisma). The show starts before the audience member gets to the venue. The audience will be given access to a podcast that will feature a storyteller setting the stage for the audience to get inside the lives and experience of people with I/DD. The goal of each show is to move people along the continuum of outsider, person with knowledge of the specific barriers faced by people with disabilities, a person who is connected to the community of disability advocates, to finally a person who takes an advocacy action. Advocacy actions and next steps will be available at each show.

Treasure Maps: The Georgia Storytelling Roadshow, the newest iteration of The Storytelling Project, a partnership between the Georgia Council on Developmental Disabilities, L’Arche Atlanta, StoryMuse, and Resurgens Impact Consulting will kick off with a virtual workshop available to any and all people with developmental disabilities on Thursday, February 25 at 5p.

Following the introductory workshop, participants will be invited to apply to participate in the cultivation and creation of their virtual stories, which will then be recorded by the film company, Xerophile, The show, in the format of pop-up, interactive, drive-in theatre will tour to six cities across the state of Georgia—Atlanta, Dahlonega, Augusta, Savannah, Macon, and Albany—in late June and early July.

“The primary objective of this project,” said Shannon M. Turner, Founder & Creative Director of StoryMuse, “is to provide a virtual stage for the important stories of people with developmental disabilities, inviting their stories in from the margins to the center of our communities. But an equally important component is to provide education and advocacy to the general population and legislators around the Medicaid waiver, a vital funding structure which supports the lives of people with developmental disabilities so they can live independently.”

By providing living portraits of individuals struggling to receive a life-altering benefit, the project is endeavoring to expand cross-sector allies and garner voices of support outside of the developmental disabilities community.

There are currently almost 7000 people in Georgia on the Medicaid waiver waiting list.

While they wait for their applications to snake through the maze of confusing guidelines and procedures, Georgia residents and their families can live in exacerbated poverty, isolation, and emotional and physical distress. At the same time, people with developmental disabilities who have the Medicaid waiver have jobs (sometimes with supported coaching), their own housing, and full community integration.

Treasure Maps aims to paint a fuller picture of the complex, beautiful lives of these Georgia citizens who do not deserve to be sequestered in institutions.