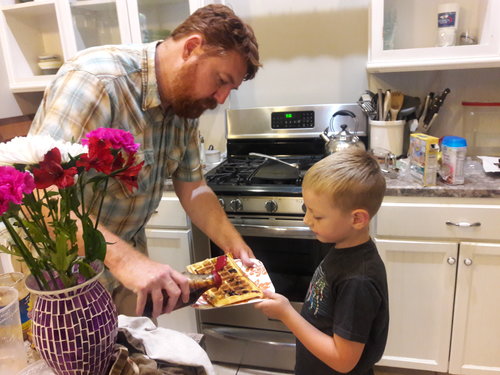 Today I’m excited to bring another installment in my series of Happy Stories. As a reminder, here are a few of the previous ones [here and here]…

They were some of the best waffles I’ve ever had. Because they featured some of my favorite toppings…
…blueberries,
…pecans,
…courage,
…and stories.

Erin & Joe invited me over on a beautiful fall Sunday morning to share their story. The waffles were Joe’s idea.

“I don’t know how far I want to go with this,” Joe said, standing over the sink. The reason why Joe wasn’t sure about just how far he wanted to go with his story is also the reason why I wanted to tell it in my Happy Stories series.

“I understand,” I said frankly. “I negotiated all this with Erin, and this story is a lot about you. I’ll take my lead from you.”

After that, the book was open, and so was Joe’s kitchen. Like I said–Best. Waffles. Ever.

Erin was Joe’s first OKCupid date. He was her last.

Erin was ready to move past online dating when she met Joe. In fact, she was starting to research methods for having a child on her own.

Thing is, when she met Joe, he came as a “package deal”. He was full-time dad to a cute little guy named Jack.

Joe’s first wife, Sybil, passed away from complications related to preeclamsia in the week after giving birth to Jack.

At this part in our morning together, Erin let Jack go watch cartoons with his waffle, even though he was sort of grounded from electronics for the weekend. Jack’s aware that Sybil died around the time he was born, but he doesn’t know the details yet. They’re honest with him, just in an age-appropriate way.

In some ways, their story could have ended up a modern day version of The Gift of the Magi. Erin really wanted to have a child biologically. Joe did not. They might have sacrificed what each wanted to be together. Instead, at the end of the day, they both got what they wanted. After Joe voluntarily changed his mind.

When they got married, he was completely on board with the plan to have a baby together. It was actually his idea. Unfortunately, the train was quickly leaving the station without them both.

It turned out Erin’s instincts were right before she even met Joe that, if she was going to have a child biologically, she needed to get started soon.

They went to a fertility clinic early in the process, they thought, just to be practical but were immediately told they would have trouble conceiving.

The story gets pretty challenging, expensive, and complicated from there. It’s a variation on theme for so many couples and single women who struggle with infertility. After several rounds of IVF, a miscarriage, and conflicting advice from various doctors, finally success! Baby Fiona was on the way!

Then, reality set in. Joe was faced with the prospect of another due date. Another delivery room. Another high risk pregnancy. That thing he feared the most was lurking around the corner. Joe had to face his trauma from the birth that did not go well.

He did face his trauma by going to counseling, but it didn’t help that Erin wound up having some problems with high blood pressure in the final days before giving birth. High blood pressure is a symptom of preeclampsia. There was a preemptive trip to the hospital. And a lot of worry.

You have to admire Joe for facing his fear, and for knowing a little counseling would be helpful in this situation. He talks about how the definition of brave is not not having fear, but walking with your fear. I especially appreciate how he wants to model that for his son.

Ultimately, though, Joe got to have the thing so well and truly earned at this point–a happy delivery room experience.

I asked Joe whether his first wife would have liked Erin, whether they would have been friends, and he said absolutely, yes, without a doubt. Because he’s just attracted to smart, thoughtful, creative women.

Erin takes that notion quite seriously. She curates little objects she’s found in the attic like pottery Sybil made and keeps them on display so Jack will know his first mom. She and Jack share this feeling that they’re both archaeologists, constantly uncovering new things about a person they never knew, but who will always be a part of their lives.

Erin adopted Jack on their one-year anniversary. It was something they meant to do a lot sooner. They’d just been a bit busy that first year.

Bonus: Do You Remember When We Decided To Get Married?