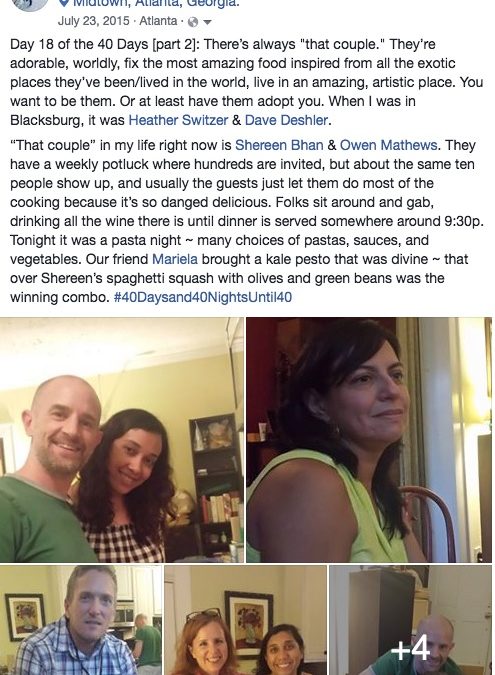 A few years back, when I was preparing to turn 40, I set out to conduct a project, counting down the final 40 days until my birthday. You may have read about it or watched my Pecha Kucha presentation here.

In summary, the tenets of the project were…

I went on hikes, took yoga classes, rode bikes, went to new restaurants, had phone dates and just generally had an exhausting, invigorating whirlwind of a time. I developed a series of questions to ask each person as we adventured together…

I was struck by was the similar answers to the final question. It happened over and again. Many of the answerers were people whom I admired and saw to be much more actualized than me because they…

In short, these were people whose lives, on the outside, I often admired and sometimes coveted. However, when I asked the magic wand question, I found myself surprised by the fact that, to a person, they answered that they would quit their awesome jobs, sell that beautiful house so as not to be tied down by it, write or create something, and especially travel more.

Since nearly every answer didn’t really require a magic wand, I would often follow-up and say that…”This wouldn’t take a magic wand. What’s stopping you from fulfilling that dream?” They would begin to share feelings very similar to my own of feeling extremely stuck in their lives, unable to change their circumstances.

What emerged over time was a pixelated image across economic and marital status, gender and sexuality, geography and age. So many people feel mired in the inertia of their lives. It’s extraordinary to me, and yet apparently it’s so ordinarily true.

After having stood and presented my final project in grad school (the equivalent of my thesis), my master teacher congratulated me on the completion of my program. He spoke about what it would take to move forward as a creative leader dedicated to social justice. He pulled out and tapped on each shoulder me with a device he’d made which was one-part magic wand, one-part bolt of similar length, meant to symbolize that success is made up of equal amounts hard work and magic. You have to put one foot in both camps, placing value and trust in both. (I’ve since re-created this symbol for my niece on her 13th birthday and a friend who was considering the launch of her own business.)

These days, now that I coach storytelling both to groups and individuals, one of the things I endeavor to do is to help people hyperlink out of that stuck space, especially in my “manifesting stories” module. When a person is at a crossroads, stuck in a certain story about her life, and seemingly on the cusp of a new direction, I help her develop a new story–even stand up and tell it as if it were already true. The principle behind this process is that, if you’re on a journey, you need to know where you want to go. Once you realign the compass and point your car there, you’re going to start heading to that point. You gather your resources, make your map, and just begin. It may take you a little longer than you planned with pitstops and sunset views, but at least you know that you’re moving forward.

Yours in the journey…

You can read my daily posts from the 40 Day Project with the hashtag #40Daysand40NightsUntil40.