Strong at the Broken Places 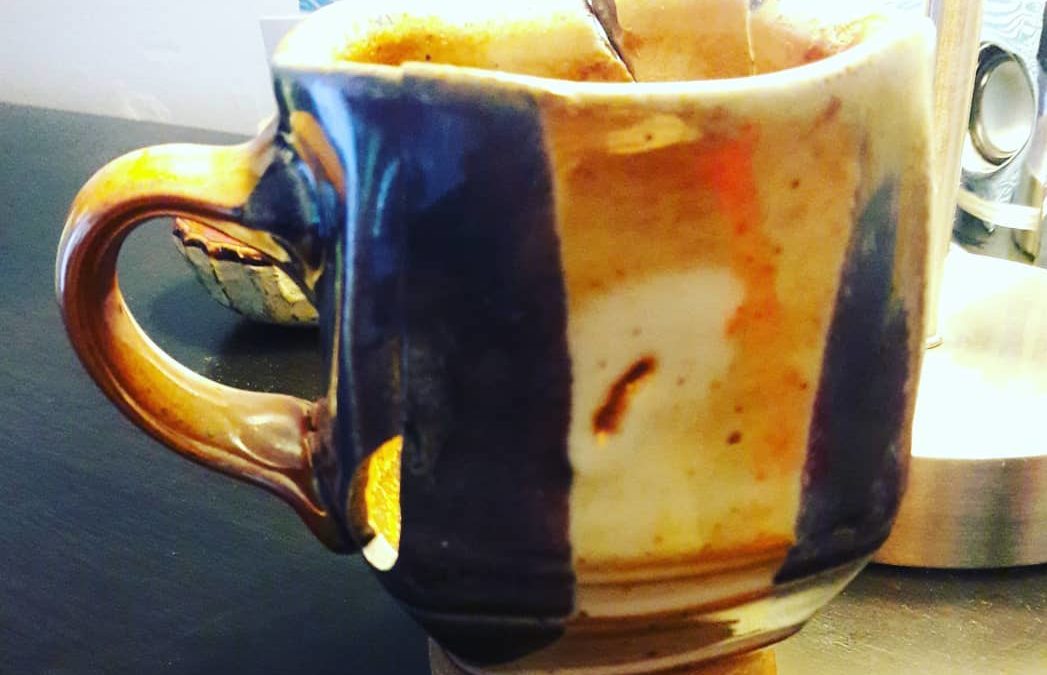 I was a clumsy child. Even broke my arm once standing on a rope that was lying on the ground.

We moved a lot. I host a fair amount of events and people both in my house and elsewhere.

I say all this to convey…I try not to put too much stock into stuff. As such, I’ve always prided myself in being pretty zen when things break. I see it as the universe’s natural cleansing process.

Even last year, when I broke my favorite water bottle that I’d had for six years, I made a joke of it, putting a pictorial tribute to it online, and moved on.

Today, though. Today was different.

Today, I broke my beloved coffee cup. It was given to me when one of my first friends got married almost twenty years ago as a present for being part of her service. I’ve ported it around from office to office, desk to desk. It was always the first thing I set out to make myself feel centered in a new office.

When the wheels were starting to turn for me to launch StoryMuse, I brought the cup home as a symbol that my office, my professional energy, my calling, would soon be here.

And so, when it broke, I cried. The cup was broken; I was heartbroken.

It felt like a giant chapter of my life had closed. This thing, and all that it carried, is literally irreplaceable.

As I like to say, what good story starts with,
“Everything was always ok”
moves on to
“and I was always really good at it”
and then ends with
“and so nothing changed.”

There is a notion in Japanese pottery called kintsugi. When a piece breaks, you put it back together with lacquer or gold-leaf and gilding. The work becomes even more valuable, celebrating and highlighting its imperfections, rather than trying to cover them up. There are other Eastern philosophy principles embedded in this practice, including wabi-sabi, embracing or even planning for flaws.

What I think and what I know is it inspires compassion and empathy. First for ourselves, and then for the world. One of my favorite quotes is “If you’re a stranger to your own wound, then you will be tempted to despise the wounded.” ~ Father Greg Boyle, Founder of Homeboy Industries

We are indeed strong at our broken places. When we do not endeavor to cover up our brokenness, and know that the things that created those flaws are indeed our most precious stories, then we will find our greatest super power.