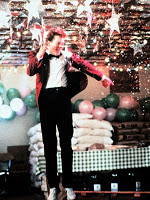 For this post, I experimented with a new form. You have the choice either to read the story below, or click here and listen to me read it to you (as well as look at a few pictures along the way). This story was written in preparation for this month’s MothUp on Tuesday night. The theme is Scars. Hope I get to tell it! I’ll let you know…

In this story, I am within weeks of turning 30. If I thought my twenties was a time of angst, railing against my lovelorn state, turning 30 was angst plus the return of Saturn.

During that summer, I attended a camp for grown-ups who wanted to learn how to sing or dance or play the dulcimer. Ostensibly, I was there as part of a micro-internship for grad school, but really, it was a great excuse to work with my friend Erica, for a week and hang out with the singers, the swing dancers, and the dulcimer players.

So I met this guy, who looked incredibly like Napoleon Dynamite. I mean it ~ he had very curly, sandy blonde hair, and glasses. He was skinny and pale as all get-out. And most days, by about 3:00 p.m., given the sweltering summer heat, you could tell he wasn’t a regular bather.

His name was Jesse.

Somehow, though, with my approaching birthday looming large, and the hormones raging, all of the sudden that special summer phenomenon overcame me… camp crush.

We would only be together for a week. I had to act fast.

Before I knew it, it was Wednesday evening—the night of the big dance—and I still hadn’t found a way to get his attention. I showed up wearing this slamming outfit – bright turquoise tank top to show off my red hair, flowy black pants to move with the dancing – I was hoping desperately that he would ask me to dance. Given that he was a swing dance teacher, I felt the chances were in my favor.

About midway through the second set, they started to play “I Will Survive.” God, I love that song. It’s like the Women’s National Anthem. I know just what I’ll do to get his attention. Now, I’m not a DANCER but I am a sort of dance groupie and I also love dance movies. And I’ve basically studied that one dance move in the movies where they run and slide across the floor on their knees. It happens in Grease at the National Bandstand concert, and I think Kevin Bacon does it when he comes triumphantly back into the prom at the end. It is a show stopper. I’d never tried it before, but this was my chance.

In a last minute decision, I thought that I should take off my shoes so I wouldn’t scuff them.

As Gloria S. Gaynor made her transition from the slow and building “I spent oh so many nights thinking how you done me wrong, but I grew strong & I learned how to get along” to the fast, thumping “And now you’re back from outer space”, I not only HEARD the music, I WAS that music! I performed said dance move. I launched myself into outer space. It was an old gym floor, but I probably slid a good ten feet across it, and somewhere around halfway through, I knew something was terribly wrong.

Even though I was in a lot of pain, I sprang off the floor and started dancing wildly like I had just performed the trick of the century. The people who saw the move were all applauding, hooping and hollering. I just kept on dancing, smiling what I hoped was a confident smile! As the song faded out, I slowed and discreetly looked down to discover that I had giant, gaping wounds in the tops of my feet. They were angry red with gym floor dirt crammed down behind open flapping skin. They looked rather like I had suddenly and mysteriously developed stigmata. Jesse was now dancing with someone else, and I realized he wasn’t playing it cool with me. He wasn’t playing anything at all. He didn’t even notice me.

“One way or another,” I thought to myself, as I hobbled across the dance floor to the sidelines at the end of the song, “I may survive, but this is not going to garner the kind of attention I was looking for.”

My stigmata took a long time to heal. It was at least two weeks before I could put on a sock, much less a shoe that went across the top of my foot. There were times when I wondered if somehow I had taken off so many layers of my skin that maybe I’d actually shaved off the first few layers of bone as well. The wounds became infected over and over again, and would seep unspeakably nasty things. It was right up there with the time when I was thirteen and had carpet burn over 30% of my face and tried to cover it up with make-up but that’s another story for another time.

Finally, six weeks after I’d left the camp behind, when the idea of being Jesse’s Girl was fading into a weird anecdote, I had to accept the cold, hard fact that I was going to bear the reminder of that moment for the rest of my life.

From time to time, I would think about Jesse, and I would imagine a different scenario on the night of the big dance. What if I had just gone right up to him and said, “Can I dance with you?” I’ll never know how or whether it would have worked out differently.

What I do know is this: the simple act of growing older, and definitely wiser is very empowering. I now have some evidence, empirical and physical, that there are better ways to get a man’s attention.

And I have some much better dance moves.

Click here to view a live version of me telling this story at The Moth.