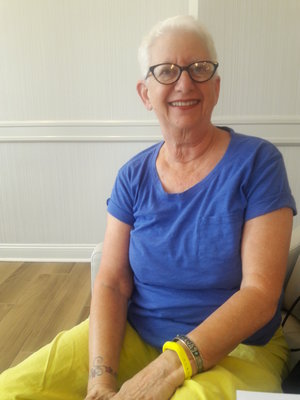 “Show me a man with a tattoo and I’ll show you a man with an interesting past.”
― Jack London

Penelope exhibits joy. Just a little bit of mischief exudes from the curve of her mouth and the sparkle in her eye.

If there were a “type” of person to have a tattoo, Penelope Starr doesn’t really come off as that type. Yet, her most prominent tattoo sits there on her wrist like a beautiful, distinct piece of jewelry, catching your eye with every motion of her hand.

Penelope’s self-ascribed title in life is community storyteller. She gathers people together in Tucson, AZ on a monthly basis for her show, Odyssey Storytelling. Her current life and her work are super interesting for sure. Fascinating, actually.

But that tattoo. It’s the story she’s most interested to tell you at this moment.

“I met my daughter when she was 44 years old,” she told me. We storytellers think a lot about strong opening lines, and that one’s quite a zinger.

She went on to talk about how, after giving up her daughter at birth when she was 20, her daughter found her again just a few years ago. She’d been totally open to that, sort of hoping for it actually. After they’d gotten to know each other for a while, as Penelope is a storyteller, she challenged her daughter to join her on stage so they could tell their story together.

Her daughter said, “I’ll get on stage if you get a tattoo.”

Eventually, they came up with a whole design which didn’t have much meaning at first; it was just something they both liked. Later on, someone pointed out that the image actually had a lot of interpretive meaning.  The number of stars equalled the number of children Penelope had, and the number of dots almost equaled the number of her grandchildren, but it was missing one for her grandson, Gus. Back to the tattoo artist they went. Unfortunately, there are no freebies in tattooing because of the sterilization and disposable items involved. So, now she has a snake tattoo on her leg as well because: why not, if you’re paying for it?

Here’s what I find truly amazing about this story. The recorded version I have to share with you here is of Penelope re-enacting a moment we’d had the night before over dinner at a conference. It was one of those long, lazy meals where people are both getting to know each other and feel they already do and completely exhausted from all the traveling and late nights and mental work of conversations and workshops and, let’s face it, posturing that goes along with these endeavors.

The first time I asked Penelope to tell me about her tattoo, I was just making conversation. When she finished telling us her story, the man sitting next to her said, “You know what, I have a daughter out there in the world somewhere as well. I gave her up at the exact same age. I really hope she finds me someday too.”

It was one of those human moments where everyone just lets their guard down a little bit more. My heart sang with longing for that man and with joy for Penelope and her daughter to have found each other and for me to know all of these stories.

You can listen to Penelope’s full telling of her story here.

Note: Penelope has written a book! The Radical Act of Community Storytelling: Empowering Voices in Uncensored Events, available on her website, penelopestarr.com.