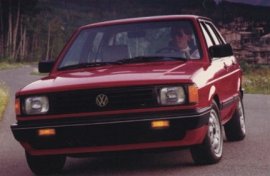 I blame it all on Cliff D.

Cliff D. was a local celebrity at Emory & Henry College for one reason. He had an outrageously over-the-top conservative talk radio show on our local college station. His job in life was to piss people off. And he was basically very good at his job.

Let me back up. When I was nineteen, I inherited the coolest car that I have ever owned ~ a red Volkswagen Fox ~ from the coolest relative I will ever have. My Uncle Ken was a wonderful guy who died an untimely death way too young. I’m the same age this year that he was when he died as a matter of fact. Stories about him and his passing and what that meant to my college self go elsewhere. But his car and the way I felt about receiving it definitely apply here. I went everywhere in that car. I listened to the cassette tapes I found in the glove box like I was trying to unravel mysteries about Ken’s life I didn’t know. The first day I got the car I put 75 miles on it just driving all over the Emory/Abingdon area. That evening, I went up into the Emory cemetery, sat on the hood and smoked half a pack of cigarettes all by myself, watching the sun go down, feeling sad and romantic and grown-up.

So, back to Cliff D. We are now about six months after I’ve received the car. On this night, Cliff D’s topic du jour was the gays.

I was, in fact, driving over to my college gay boyfriend, Matt’s, house to pick him up so that we could go to the Omelet Shop. It was our habit in those days to go there for two to three nights of the week and sit for hours in the middle of the night as we ingested mass quantities of coffee, eggs, toast, and Norton’s Anthologies.

When I got to Matt’s house, I parked the car as Cliff D was spewing Bible verses, and I was fuming mad. I went inside to tell Matt that I would be sitting outside waiting for him while he finished, you know, fluffing his hair or something.

I couldn’t have been inside longer than 90 seconds.

When I came back out, everything was dark. There were no lights on in Matt’s parking area. I didn’t think much about it at first. We were in rural, southwest Virginia. It was a dark night in early spring, a cold sprinkling rain was just starting. I suddenly realized that I couldn’t hear my car running or the radio or anything. It must have stalled out, I thought to myself.

I am pretty nightblind, and so my strategy most of the time in circumstances like this is just to walk until I run into the thing I’m trying to find. But this time, I walked and walked until I ran into the concrete retaining wall at the end of the parking area.

And that’s when it dawned on me – My car is not here!

I thought about it a bit longer. When I got out to go inside, I was sitting in a flat area, so even though it was a stick shift, I didn’t set the parking brake. But when I got out of the car, I was so mad, I had slammed the door. I must have set it into motion.

I took off running down the driveway in sheer panic and then something caught my eye far off to the right in a gathering of trees. There they were…my headlights. Sticking straight up in the air. My brain couldn’t comprehend it.

I remember, in the movie Tremors, the aliens sucked this car under the ground, and the last image you saw was from far away. The headlights went straight up into the air before they disappeared. That’s what this looked like. How could my headlights be pointed straight up like that?

I ran across the yard and approached the car still not understanding what it was I was observing. Which is why, when I reached out to touch the car, my feet flew out from underneath me, and I found myself tumbling down the 15 foot, 80 degree embankment that the car was sitting in.

There I was, completely dazed, having found the barbed wire fence that the car had taken out on its way down, laying in the pool of water that was beginning to collect in the gully next to the road that I had just discovered I was now next to. Cliff Droke’s voice was still barking out hell and damnation from inside the car.

The next thing I can remember is that I heard God’s voice from above.

That didn’t make any sense. God generally knows whether or not you’re ok. But the voice sounded so strange, and again, it was coming from directly over my head. Remember, I was having quite a hard time understanding the physical dynamics of the situation I was in. Finally, I started to take it all in, and I realized that God, at that moment, was my gay boyfriend.

“I’m fine, but I really don’t know how I’m gonna get out of this mess.”

The first thing I decided that I needed to do was to turn the car off. In order to accomplish this task, I had to reach up, open the door, jump two feet off the ground, grab the steering wheel with my hands (feet dangling off the ground), reach in and turn off the ignition, lights, and radio. While I was performing these Lara Croft-style antics, the whole thing began to creak like it was about to turn over. So, I let go of the steering wheel, pulled my hands out fast before the door slammed shut, and slid back down the embankment on my belly.

By this time, Matt had walked all the way down his driveway and back up the road to where my car was, um, resting so that we could walk back to his house and begin the painful process of making phone calls: 1) the tow truck; 2) my parents.

Only partial reality had begun to set in for me. I was at that point in a crisis when your brain begins playing tricks on you and you start thinking completely outrageous things. Like maybe this is a very permanent situation you’ve put yourself in.

“You don’t understand,” I found myself crying to Matt, “They’re never going to get it out of there. They’re going to have just plant flowers in it and call it the Shannon Turner Monument to Stupidity.”

When we got back to the house, I showered off a bit and Matt gave me some clean, dry clothes. Unfortunately, we did all that before I called AAA because when I was speaking with them, the last thing they said was, “Could you leave the hazard lights on for us to aid the process of finding the car?”

Yep. I had to traipse back out there and repeat the process of reach up, open door, jump, steering wheel, jerk hands out, aaaaahhhhh….

When the tow truck finally arrived an hour later, I walked up to the window and knocked on it. The driver was literally sitting there with his head in his hands. “Hi,” I said. “I’m the person responsible for this mess.”

“I just have one question,” the bewildered man replied. “How?”

You see, he didn’t understand that there was a house and land up above. He thought that I had somehow managed to drive my car directly sideways from the road up the embankment. When I explained to him the real course of events, he thought I was slightly less crazy. Slightly. It didn’t make his job any easier though.

He pretty much had to put a giant hook under the trunk of my car and drag it out. I’ve rarely heard a more sickening sound in all my life. And the visual of watching it bounce down and out, careening across to the other side of the road. It was like witnessing a slow motion wreck.

While the trunk was crumpled, the car was still structurally sound, so my dad and I decided only to get the taillights fixed. Six days after I got the car back from repairs, someone else rear-ended me, and I was able to negotiate with their insurance company that, rather than suing for damages for my whiplash, they would pay to fix the whole trunk situation.

I loved that car. I drove it practically until the wheels fell off. Fortunately, the wheels didn’t fall off that time, or any of the other times I abused it. It was one of my best friends in college.