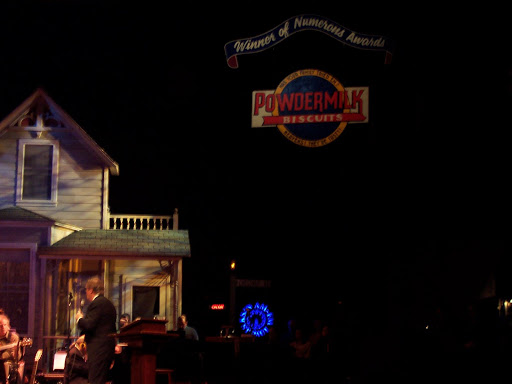 Ok, so I know you’ve all been waiting on pins and needles all weekend long. Let us all just acknowledge the disappointment and heartbreak up front that I did not get to have my call out read on the air. Ok, disappointment over. Because, except for that, it was a perfect night. Our seats were phenomenal. There simply weren’t enough people standing at the Will Call area when I walked up and said, [all breathy and important] “Um, yes, hello, I’m here to pick up my tickets. I’m a guest of Rich Dworsky.”

Exhibit A. This show is hysterical. Except when it’s not. I also need to take a pause to say that none of my pictures turned out very good. They all had technical difficulties. Oh well, I have many mind pictures to savor. Anyway, during the fake sponsorships, what you don’t see on the air is that they actually fly in signs for the “sponsors.”

Exhibit B. The News from Lake Wobegone. Garrison, as suspected, makes this up off the top of his head, and gets quite lost and has no idea where he’s going, and at some point looks up, realizes that there’s an audience sitting in front of him and says, “And that’s the news from Lake Wobegone, where all the women are strong, all the men are good looking, and all the children are above average.”

Exhibit C. Rich Dworsky, lovely little elf of a man that he is, who has dreams to write a Broadway musical (doesn’t “music and lyrics by Rich Dworsky” just roll trippingly off the tongue?), stood and talked to us for about 20 minutes after the show, and then, you got it, introduced us to Garrison himself. I did not ask for an autograph or a picture from the man. I just played it cool. I was mostly too dumbstruck by how much he looks like The Grinch up close. When I told him where I was from, he looked at me very seriously over the top of his glasses and said, “Isn’t there some school there?” I said, “Yes, sir, Virginia Tech. I’m an MFA student there. But I was an English major first!” He just snorted and walked away. Needless to say, I had a much more enjoyable time talking to Rich, who is also a Salsa dancer.

Anyway, I could go on and on about how beautiful the theater was and how much fun it was, but I’ll just leave it at this. Hope you tuned in.

Miss you all in your respective parts of the globe!

(The Fitzgerald Theater from approach, the Radio Show Players at work, and me waiting for the show to start–cupids projected up on the curtain.)