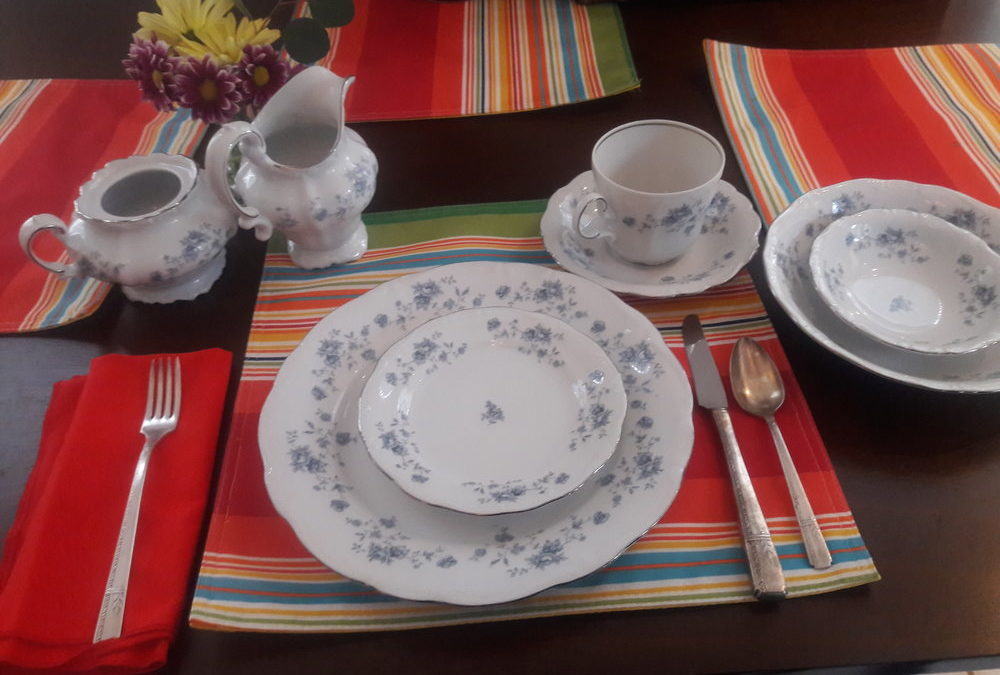 What’s in your closet that’s never seen the light of day?

For years now, I have toted around this box from apartment to apartment to house marked, “Marilyn’s China.” I never opened it. Not once.

My Aunt Marilyn was a legendary character in my early life. We were travel companions for a while. My favorite trip was her “trip of a lifetime,” when we went to Hawaii together.

Marilyn had suffered a brain injury in her very young life, which led her to have some mental and emotional challenges. Although she had a love at one point with another young man who also had mental challenges, pairings of that kind were taboo and not understood enough to be supported in midcentury America.

Still, Marilyn wanted to be a proper lady like everyone else she knew, and so, once it was decided she would never be married, she went out and bought herself some china. I wish I knew in what ways and how many times she was able to use it.

I remember when it was given to me, along with her tarnished silver, which lives in its own separate wooden box with fading, red velvet lining. The patterns on both the china and silver are beautiful, and yet they feel like something that should never belong to me. I felt weighed down by their importance, their delicacy. I also felt something else.

Secretly, when Marilyn bequeathed me her china, I felt she was sealing my fate as the next maiden aunt in the family.

I think that’s why I left the box unopened all this time. I always stored it far out of the way, up high on an unseen shelf in all of my homes. Out of site, out of mind. Despite the fact that I fancy myself an environmental person, if I ran out of every other plate at a party, I would open up disposable ones rather than crack open that box.

This weekend, I’m going to be doing something really different than I’ve ever done before. I’m going to be performing the marriage ceremony of some good friends of mine. They wanted a storyteller to do the honors because they said that’s always the best part of any wedding ~ when the officiant tells the couple’s love story. I’m nervous as all getout about doing such an important thing in two people’s lives, but also excited to try.

In anticipation of tomorrow’s festivities, we kicked off the week with Leslie’s bachelorette party on my back porch. Leslie is what you might call an Anglophile. She loves anything that emanates from the British empire ~ its tea, TV shows, and all the rest. So, when it came to the prospect of throwing her a bachelorette party, we could think of nothing more perfect than to throw Leslie a high tea at 3 p.m. with hats and sugar cubes and scones and clotted cream.

The afternoon was perfect.

They were calling for rain up until the hour beforehand, but a drop never fell, so we moved everything outside in the last half hour.

Of course, in the back of my mind, as soon as I agreed to host the affair, I knew Marilyn’s china would make its debut. I thought to myself: How perfect. It gets to participate in a lifelong dance of love in some kind of way after all.

Before I put the china and silver away, I sat down at the table and had tea again with it by myself. I enjoyed a solitary egg and tomato sandwich, debating with myself whether it’s redundant to put mayonnaise on an egg sandwich (sorry if I just offended any vegans or gluten-free folks).

I still have no idea if I’ll get to find my own semi-permanent dance partner in this life, but I’m glad I finally broke out the china. I didn’t even put it back in the box. I just found a shelf in the storage closet where it can live and breathe in the open air ~ and wait to be gotten out more easily.

In the meantime, I’ll dance to this…