I Am Dexter, I Am Walter White, I Am US! 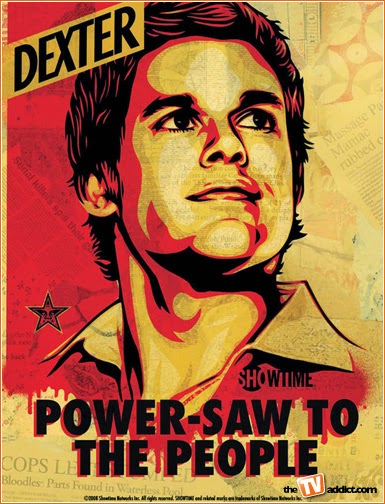 In the next couple of weeks, two of the most fascinating shows that have characterized “The New Golden Age of Television” will be wrapping up.  Both Dexter and Breaking Bad have kept millions of watchers enthralled Sunday nights with their high drama, compelling characters, and more than anything, they’ve kept us leaning forward in desperation with their achingly short seasons.

Both Dexter and Walter White of Breaking Bad are fascinating character studies for sure, and I find myself thinking about them a lot.  Other shows that have dotted the popular landscape during this Golden Age include:

All of these shows’ leading characters are deeply flawed, conflicted, often morally bankrupt, and yet, through the magic of brilliant storytelling, somehow we wind up actually cheering for them.  They are the very definition of the anti-hero, but their occasionally heroic deeds, and more – because we wind up learning so much of their backstory and motivations, their beautiful complications – we simply forget that they occasionally beat their wives, steal, kill people and get away with it all. Mostly.
Still, I just can’t stop thinking about these heroes we’re so fascinated with these days, how they compare with the role we play on the global stage, particularly while the U.S. is considering missile strikes on Syria.  Once again, we’re acting as know-it-all parent to the world.  It’s complicated for sure.  I’ve heard the arguments about why we can’t sit idly by and let anyone use chemical weapons, even if it’s against their own people.  I’ve heard the arguments about the foolishness of rushing into yet another war.

So, why, you ask, am I thinking about Dexter and Walter White when I think about U.S. v. Syria?

Let’s look at Dexter.  By all rights, the character is a psychopathic serial killer.  He may have his tragic genesis story, his code, and his evolution toward emotional connection & compassion, but at the end of the day, he’s still a serial killer who hunts people down, kills them, and leaves their chopped up bodies on the floor of the Atlantic Ocean.

What’s important to remember about Dexter, though, is that code.  He only kills other killers.  He stalks those he believes have committed atrocious crimes, and before he kills them he ceremoniously holds up pictures of all their victims.  Dexter sees himself as ridding the world of bad people, his own personal crusade.  He just conveniently has this dark passenger inside him that compels, or even, emboldens him to do so where others would not.

How like us (U.S.) that we see ourselves ridding the world of bad people?

Walter White, of Breaking Bad, begins his character’s journey when he’s diagnosed with cancer.  He’s an intelligent man, trapped in middle class existence.  His cancer treatment leaves him on the edge of bankruptcy.  So, tish tosh, piddly poo, he becomes a drug dealer to make a little extra on the side. Before Walter White can bake up too many batches of crystal meth, we realize he’s stumbled headlong down the rabbit hole.  His character changes as he makes grander and grander mistakes. He gets better at rationalizing and deceiving.  At some point, you can almost imagine him taking out his moral compass, stomping on it, and burying it in the dessert like so much drug money.

How like us (U.S.) that we defend our actions, the dirty deals we make and the people we kill, the money we hoard and lord over the world, because we think we’re protecting our “families”, our interests?

Remember back in the day when heroes rode around in white cowboy hats and were not very complicated?  Straight up good vs. bad? Cops vs. robbers? Now, the cops are dirty and the robbers are really trying to support their families and start a new life.

Please hear me that I very much trust and appreciate this newer style of storytelling.  It’s highly entertaining. And, I think, it’s more realistic.  The problem with the way our entertainment used to exist was that, not only was there not as much complexity, there also wasn’t as much diversity. Now, instead of cowboys and indians, we have American Family and The Wire.

I’m simply saying that the stories that are emerging from our popular subconscious these days might perhaps be a retelling of something we’re perpetuating over and over again.  A feedback loop as it were.  No matter what, we’ve decided we’re, dare I say it, Justified?, in our actions in all their moral complexity.

After all, it does make for a better story.