Getting Inside a Bunny’s Head pt. 1 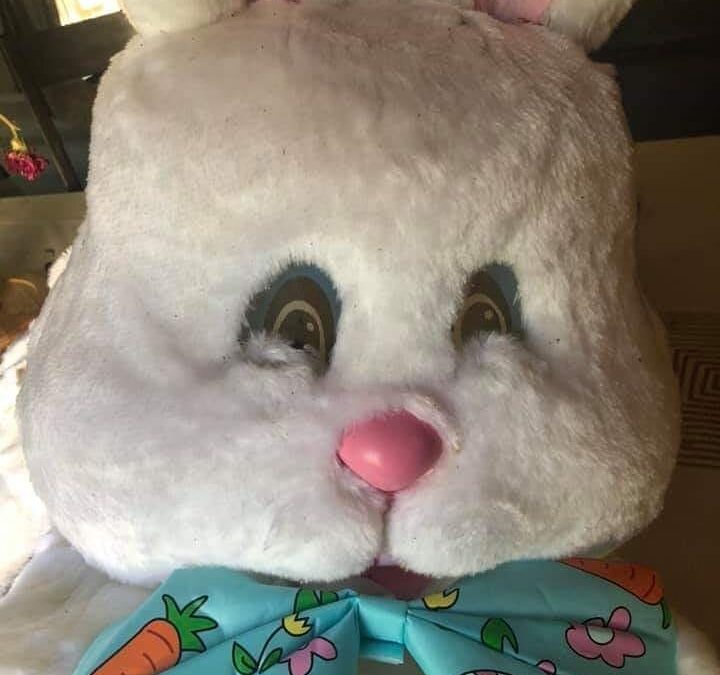 On Saturday, April 11, I came home from a long walk in my neighborhood. (I didn’t used to walk my own neighborhood very much, but I do so often now in the days of the COVID shutdown.) Sitting down to rest, I opened up Facebook. There was a message on the East Lake Neighborhood Group page with a picture of an Easter Bunny costume. “My kids are too old for this stuff, but wouldn’t this be a great year for the Easter Bunny to show up? Somebody should come, take this out for a spin.”

I don’t know about you, but one of the things that’s been hard about the pandemic has been not always feeling useful. I come from people who served the public, nurses and ministers, those who were amongst the first you would call upon in a crisis.

Storytellers are not first responders.

But this? Soon as saw the woman’s post, I could see it all so clearly. I would bring joy in a time that’s felt hard to access our joy. Also, during a period when I’ve been so very isolated, it was a chance to get out and interact with people in a manner that felt completely safe.

Before I struck out for the day, I decided the Easter Bunny should wear a mask to help kids understand that social distancing measures are truly a universal precaution. The least safe I felt all day was trying to navigate down the stairs of the porch wearing the bunny head. Being blind in one eye, and then having the vision in that one eye distilled down to about the size of a silver dollar was a challenge to say the least. After I got all that sorted out, the costume started to speak to me. I feel like the bunny has a kind of hitch in her leg, I thought, maybe kicks out a little bit and swings her elbow with each stride.

I walked the streets of my neighborhood for several hours to the delight of many children, the terror of a few more, and to the abject furor of many, many dogs. Some folks knew I was coming. Some just happened to look out their windows at exactly the right time. I also had a few special requests and appointments. After those first morning hours, I jumped in the car, heading home to have a quick virtual Easter luncheon with my mama.

With hours of daylight to go, I hit the road again. I went to stand at the window of a friend who has muscular dystrophy. She’s been quarantined for longer and at a much more extreme level than most of us. I went by the home of friends whose child was so freaked out by the sight of me coming down the sidewalk, you’d have thought I was carrying an axe, not an umbrella.

Hands down, my favorite part was visiting local businesses and grocery stores. Stopping by to wave in the windows of restaurants who’ve pivoted to bodegas with takeout & delivery service, standing on the corner to warmly wave at bus drivers, it was the closest I’ve felt to being able to truly thank someone for what they’re doing to keep us all going.

The opportunity to do a little personal shopping while in costume was in and of itself too fun to pass up. When I got into Kroger, I went straight to the pharmacy to wave at those folks. After walking away, though, heading up and down the aisles to look for things I personally wanted (not the Easter Bunny), I heard an announcement over the intercom:

It seems the pharmacy staff decided they’d thought twice, wanted to come out a photo op.

My final stop of the day was to walk in my friend, Amanda’s, neighborhood in East Atlanta Village. She ran up and down the street in advance, knocking on neighbors’ doors, drumming up an audience. We stumbled across a small family having a musical jam on their front porch. They broke into an improvised song about the Easter Bunny and came out into the yard while we had our own little spontaneous, happy Easter parade and hootenanny.

As we were winding down, Amanda turned to me and said, “I think this is more important for the adults than it is for the kids.” She pointed out that the children were taking my appearance with delight, but mostly in stride. The grownups, on the other hand, were overwhelmed with surprise and glee.

The thing about adulthood is that you know that this…this is not an everyday kind of occurrence.