blotting your eyes and crossing your skis 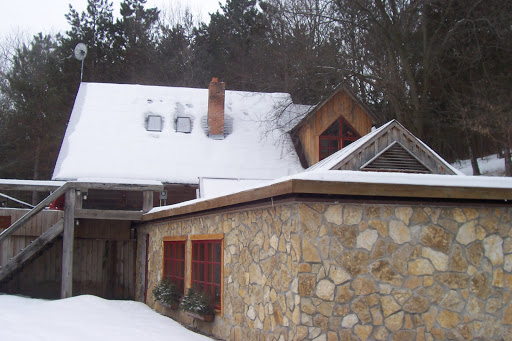 As someone who once broke her arm while standing on a rope that was lying on the ground, I have been witnessed as saying on more than one occasion that I would never put myself on two skinny boards that go down a large, snowy hill. I’ve always felt that my karmic debt was too great to really get into risky sports behavior. Especially wintery sports.

This weekend, I had the pleasure to get out of the city for the first time since I got here. I visited a lovely little cabin, which was built by a Finland expat.

The house was magical. Every part of it, including every stick of furniture had been built by this lovely Finnish man. He and his wife have funny arguments about whether or not it’s okay to paint things. The house has an indoor lap pool (which is of course frozen solid right now) and a sauna, which I adored.

So, somehow, getting caught up in the romance of this bucolic scene, I finally said yes to something I thought I never would…skiing. Having been reassured that cross-country skiing is very different from downhill skiing–“It’s like taking a walk in the woods, only gliding. Trust me. Have you ever done Nordic Track? It’s just like that!”–and having been reassured that there would be no pressure to perform, I suited up.

I should have known that I was in trouble when it took us about ten minutes to get one boot attached to one ski. After we finally got me and everyone else completely equipped, we scooted laterally across a small rise, we took off down a rise.

Um, I forgot to ask anybody how to stop myself before I got started. I must say, the lack of foresight astounds me.

So, there I lay, snow in my eyes, that same arm that I broke when I was 13 curled underneath me (along with a ski pole), trying to figure out how the heck you’re supposed to get up off the ground in this crazy situation when you’re attached to boards that are as long as your own body.

Not to worry, the rest of the day went much better. While my shoulder was (and is) still very ouchy, I had a very pleasurable glide through the woods. My ski instructor told me all about how one climbs a hill by using the herringbone technique. I would mostly fight my urge to yodel when I would coast down small rises. The whole time I kept replaying in my mind all of those old Goofy ski instruction cartoons that my sister and I used to watch on the Disney Channel after school. That and Robert Frost poems.