Persistence, or The Pool 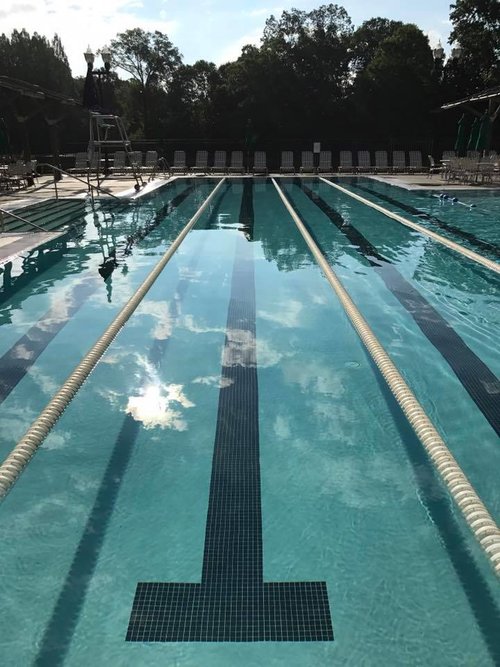 Saturday mornings for the last month, my friend Mariela and I met up at the Piedmont Park pool for an awesome swim class.

Actually, the entire class is called Sweat & Swim, where the first hour is a boot camp involving drills, lunges, push-ups, etc. One week of that, and I was done. I couldn’t walk for days after. So I decided to just stick with the ever-more-pleasant second hour: the water aerobics portion. (To my credit, I was able attend more weeks at this rate as well.)

Letting go of my feelings of being a little old lady, I gladly donned the aquabelt and did my knee lifts, running, skips, and hip circles, back and forth in the lanes or stationary against the walls.

Because I’m on the shorter side, I tend to be slower at some of these things, especially when it comes to moving myself through water that grows increasingly deeper. There were a few times in earlier weeks when friendly, helpful classmates would warn me, “Hey, you know you don’t have to go past that pylon. You can just go to this pole.”

It’s so nice to be an adult where we look out for and encourage each other, instead of make fun of each other. At least not as much with our out loud voices.In one of these moments of going up and down the lanes, I remembered…

When I was in high school, we moved. Again. (We moved a lot.) I went to a smaller high school than the one before. I decided I’d take advantage of the smaller pond by getting into more activities that were seemingly less competitive.

Right away, I started auditioning for plays. Also, as it was just after the 1992 summer Olympics in Barcelona, I was inspired to try my hand at a sport for the first time in my life. Sure, why not diving?

You may know where this is going already.I wasn’t very good at it, but fortunately, neither were the other two girls on the team. Three days a week I would go from play practice to diving practice, and then drag my exhausted, starving butt home.

Eventually, I hit my head on the diving board–twice–attempting the same dive, and quit.

Before that happened, though, because that actually wasn’t the most humiliating part, because almost no one actually saw when the hitting-of-the-head happened, something else happened that almost made me quit.

Thing is, when you’re on a sports team, you don’t get to just practice after school. Those practices are supposed to be leading to something…competitions. Meets.

And wouldn’t you know it, we wound up going back to my old high school for a meet. At first I was super excited to see some of my old pals, but then it occurred to me.

Wait a minute! These people are actually going to watch me dive. I’m going to have to compete against them.It got way worse than that.

Turned out my team didn’t have enough girls for the free swim heat. The coach tapped me. Even though I tried, this was not a man to be argued with. I mean, I had never even trained for this type of thing. I was a diver.

Reluctantly, I went over to the edge of the pool and prayed. Just like the night before my fifth grade graduation when I prayed somehow the dress of my dreams would appear in my closet overnight, I prayed that magic would occur. Somehow I would have this burst of energy and strength come forth in my body I didn’t even know was ever there.Instead, it was way worse than I feared.

In this heat, you had to swim four laps. By the time I had completed two, everyone else was done. If I didn’t swim all four, disqualified! Not just me, the team. What commenced was the longest…I don’t know, like, ten minutes?…of my life.

Like Dory, I had to just keep swimming. As people from both my old school and new school stood there and watched with piteous looks on their faces. They tried to be encouraging, but I could tell in their eyes, they were as embarrassed for me as I was.It wasn’t many weeks after that I hit my head.

Frankly, I was kind of glad.

Later that fall, I won my first award for the play I was in. Even though I’d woken up the morning of that competition with either stomach flu or food poisoning, threw up all over the bathroom minutes before walking on stage, I still had the capacity to dig deep. I knew then the stage was the pool I was meant for.I do still enjoy a real pool though. Just not, you know, when so many people are watching.